Amundi and Preqin today launch the most comprehensive analysis ever undertaken of the alternative assets markets in Europe. Based on industry-leading data collected by Preqin since 2003, this report gives a comprehensive view of the world’s second most significant region, after North America, for the alternative investments industry. Europe has a rich and evolving alternative assets ecosystem, with over 5,700 fund management firms and 2,800 institutional investors overseeing investments across private equity, private debt, real estate, infrastructure, natural resources (collectively termed ‘private capital’) and hedge funds.

The total assets under management for the alternative assets industry in Europe reached a record €1.48tn as of September 2017, the report finds. This has been driven by strong inflows of capital: Europe-focused private capital funds – including private equity, private debt, real estate and real assets – secured a record €184bn in 2017, having seen annual totals increase every year since 2011. At the same time, 52% of Europe-based hedge fund managers saw net inflows in 2017 – the highest proportion of any region – as the industry recorded €27bn in net capital inflows.

Fundraising activity has been supported by strong long-term performance compared to other investments. Europe-focused hedge funds posted average annualized returns of 6.33% in the five years to the end of March 2018, significantly above the 1.94% posted by the FTSE 100 in the same period. Private capital funds focused on the region, meanwhile, have returned an average of 14.7% in the five years to September 2017, higher than either North America- (13.1%) or Asia- focused (12.5%) funds.

“With a mix of mature and emerging economies, and an evolving social, political and regulatory environment, the European market for the alternative assets industry requires careful navigation. Certainly, European alternatives are in rude health, and the prospects for growth are good: more than 2,800 investors in the region allocate to one or more alternative asset classes, and assets based in the region are nearing €1.50tn.

But the coming years won’t be without challenges, particularly in the face of more stringent regulation, as well as the end of quantitative easing and its impact on the availability of financing. Now more than ever, investing in Europe requires expertise and judgement to materialize its promised rewards.”

“It is no longer just European banks and governments that are providing funding for the real economy: insurance companies and pension schemes are also playing their part. The popularity of alternative investments among pension schemes and insurance companies is well understood: the unconventional monetary policies developed in response to the Global Financial Crisis had a significant impact on all asset classes.

Real assets are appealing to long-term investors for three reasons: they allow such investors to capture an illiquidity premium; they enhance income through a source of predictable returns; and they create diversification, as they have low correlation to traditional asset classes.”

Preqin is the leading source of information for the alternative assets industry, providing insight and analysis gathered by its global teams of dedicated researchers. Founded in 2003, the company is a frequent source of intelligence used in the global financial press, through its online databases, regular publications and bespoke data requests.

For more information, please visit www.preqin.com, or email us at info@preqin.com. 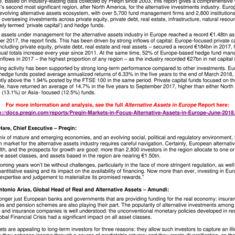